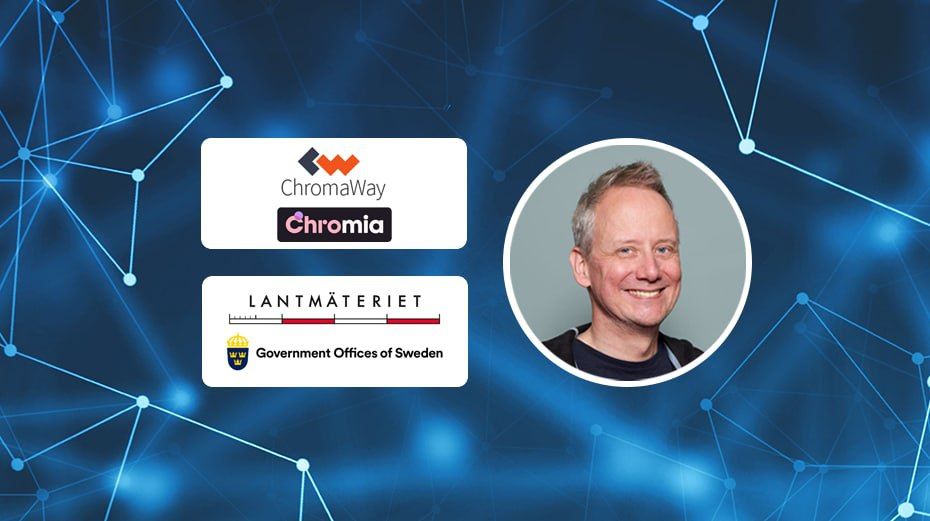 ChromaWay: Tell us more about the AI project that ChromaWay has been working on in cooperation with the Swedish Land registry for a report to the  Swedish government.

Jorgen: The Blockchain-AI project was initiated by the Swedish government and managed by the Swedish Land Registry. This project is about exploring a future in which AI becomes a part of governance. As a citizen/customer, when you contact authorities regarding some issue, they will respond to your request and perform a certain action (“åtgärd”, which is the word used in Sweden somewhat akin to “decision”).

Thus, the main question that ChromaWay is striving to answer in this project is “How do you maintain trust for the government when part of the decision process, or at least part of a recommendation for action, is automated?”

'ChromaWay: Interesting. What do you think are the main challenges for implementing AI in such programs?

Jorgen: Implementing Artificial Intelligence is made more challenging by the fact that what we consider as AI today is often artificial neural networks, which are hard to tease apart. It can be difficult to explain why neural networks came to a certain conclusion. There are other types of AI that are rules-based and/or backed by statistics, where it is easier to understand as to why a certain result was reached. Work is being done to try to make neural networks more transparent. In a way the current inscrutability is almost paradoxically part of why many people are excited about AI - there is an element of mystery and magic to it. However, mystery is not what you want when it comes to governmental affairs.

In this case, ChromaWay’s blockchain acts as a counterweight to the “mysterious AI”. The blockchain should bring as much clarity as possible to the mystery.

For this project, we looked at the AI as a black box. What we can do is to check the stuff around that black box: We can check what configuration the AI had when it came to a conclusion. In a way you want your AI in production to continuously improve. However, for this project, we decide that we want its configuration to be set for certain time periods since we believe this adds both perceived and actual stability, that you get the same government action on Monday as on Tuesday. Otherwise, it feels very unclear what is happening if the AI is in a different mood on Tuesday than it was the day before. We then batch the improvements to the AI, making each configuration change be a deliberate implementation by the authorities, to deploy.

ChromaWay: How do you plan to address this issue?

So what we propose is that an AI configuration should remain fixed for a certain amount of time. Whatever semantics are in the “black box” we cannot be absolutely sure of, but its presence should be clearly demarcated in time. A certain configuration will remain valid from a certain point in time and then at a later date it would be superseded by a newer version and that change in configuration should be signed by the government and notarised on the blockchain. The execution context needs to be clear too.

Secondly, the customer should be able to run his or her data which formed part of the application to the authorities, and see that the same result indeed deterministically happens.

Thirdly, somebody must be responsible for the AI and its configuration, which means that there must be a digital signature for the AI and also for supplementary data and for sensors such as drones. Anything that goes into a blockchain needs to be signed. The truth is that we cannot just have the AI as the signature where the buck stops, the AI is not legally responsible for anything, so it must have its decisions certified or countersigned by a government official so that he or she or the agency takes responsibility for the AI decisions. What we are trying to do in all is we are trying to make AI boring and try to take the mystery out of it as much as we can.

ChromaWay: Can you bring some examples of how AI is going to be implemented within the government, for example, the Swedish Land registry?

We are thinking of the AIs and the blockchains as a back end for any government system even though different government agencies have different systems that they operate on. URLs will then resolve back into the system. One part of this is something called Google Model Cards which we are very inspired by, this is from the Land Registry Authority’s side, and that is a layered card, with the deepest level is the data on the blockchain that can be hard to understand, it’s there to  notarise on what is important and then it is layered on top of that that explain what that data is and why that is relevant to the government action.

ChromaWay: As one of the outcomes of the projects, mentioned in the recommendations sections was:

Where can our community review the full report?

Jorgen: You can now read the full report in Swedish here.
ChromaWay: Prior to the “Blockchain-AI solution for the Swedish government”, ChromaWay has been working on introducing blockchain into the Swedish land registry. Can you update us on this project?

Jorgen: For the last couple of years one of the biggest projects I have been involved in as the technical project lead is the Swedish land registry project. It was headed by Kairos Future and a number of other partners, including some mortgage institutes and Telia and of course the Swedish Land Registry.  Currently, the project is pending new legislation by the government. A sticking point in Sweden is that you need a paper signature for property transfers. The European Union is trying to push everyone into using digital signatures, but hasn’t made it mandatory for property transfer. They have a phrasing that a digital signature should be equivalent to a paper signature, but real estate transactions are actually exempt from this rule. Other countries in Europe such as Norway, have gone further in this case. I do appreciate and understand though that there is a certain conservative approach here because I think the courts and the governments and the lawmakers need to familiarize themselves with blockchain technology. I can understand if you don’t know enough you might choose an inferior solution. Now our solution is quite secure because we actually store on the blockchain the declarations of people that they can see, we don’t actually do the property transfer on the blockchain. We just collect the evidence for why a transfer should be done. Also in the project we made the blockchain produce ASiC signed documents which is one of the EU approved standards for digitally signed documents.

ChromaWay: So when the legislation goes through will we get back to the project, or is it going to be outdated by that time?
Jorgen: No, it will not be outdated.

Jorgen: Blockchains rely on digital signatures, sometimes complemented by proof of work. You have signed for something. And that is what the Swedish Land Registry project is all about. It's about signing for something that will not be changed for a while. If you look at what is called smart contracts, then you are signing for code and an execution context, for example, “I understand what is going to happen if I sign this document”. It’s a signed workflow in our case. With bitcoin, it's simpler, then you just sign for what is “unspent outputs”, and that these unspent outputs I’m gonna sign a transaction that consumes the “unspent outputs” and create new outputs for somebody else to spend, that's basically it. But if you look at Ethereum or the smart contracts on our platform it gets more complicated. You need to understand what you sign for and this has created some problems on e.g. Ethereum because people might sign for something and the contract then starts doing things that they didn't realize it would do either intentionally or by programming error, unintentionally.

When we look at smart contracts there are basically two ways to enforce the off-chain results, one is escrow, and that means that you put on-chain currency into the smart contract and that's how you manage smart contracts while not relying so much on courts.

The Swedish Land Registry project instead uses identities so everyone is verified by their digital ID and it’s your reputation on the line basically and you can of course be taken to court as a last resort.

So a blockchain signature is, I would say, either backed by two- or multiparty escrow or by reputation, as soon as you step out of completely self contained systems such as bitcoin.

ChromaWay: What impact has blockchain made on the real estate sector so far? Taking into account the challenges that come with the adoption of emerging technologies, do you feel this impact will increase over time?

ChromaWay: Thank you for this insightful conversation and I hope we will hear more news about the AI project soon.

We invite everyone to review the report published on the website of the Authority for Digital Administration (DIGG):