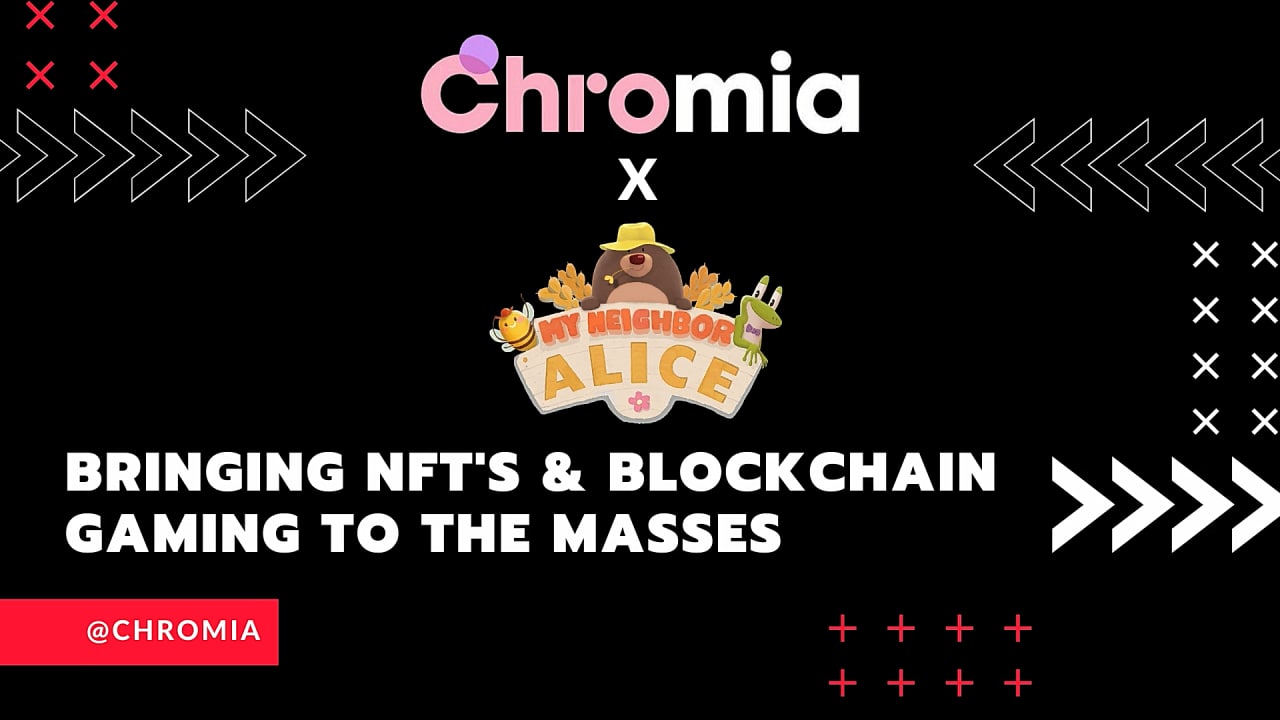 That concludes the quick version.  If you are a person who likes details, read on!

My Neighbor Alice is an upcoming social simulation game that seeks to remove the barriers to blockchain gaming faced by casual users. Their philosophy is summed up by the phrase

“It’s not just a game for blockchain players. It’s a game that will introduce blockchain to millions of players”.

These lofty goals require capabilities never seen before in the world of blockchain - and this is where Chromia comes in.

My Neighbor Alice (MNA) is a multiplayer persistent world game, where users own ‘plots’ of land and farm, collect and trade items amongst each other.  Users play as customized avatars that can be dressed and outfitted with various add-on items.

MNA is unique in that the entire game is encapsulated on blockchains - there is no reliance on centralized servers.  Land parcels, in game items, avatars and even your avatars add-on items are all represented on a blockchain.  Some of these items are NFTs (powered by Ethereum/BSC and Chromia simultaneously), while Chromia stores information about game logic, placement and orientation of objects, users inventories and more.

3) On chain logic and data storage

Chromia sidechains allow dapp developers to choose from a variety of fee models.  MNA will pay CHR tokens to reserve storage and computational power on the Chromia network, allowing its players to play without holding any cryptocurrency.  These users will have a Chromia cryptocurrency wallet which is seamlessly integrated into the UI, but they will not have to acquire CHR tokens or any other token to get into the game and start playing.  If they decide not to buy and sell the NFTs they acquire in-game, they can play without even understanding how cryptocurrency works.  The idea here is as these players realize they have earned NFT resources with real value, they will be incentivized to look into cryptocurrency markets and discover how to interact with the cryptocurrency outside of the game.

Players will be able to sign into the game using a Chromia wallet keypair.  This method is entirely non-custodial, and this sign in information is not stored on a server.  (Users will also have the option of logging in the traditional ‘custodial’ way by using a username and password, in case they are intimidated by the non-custodial method).

On Chain Logic and Data Storage

Chromia’s powerful relational database architecture allows it to store and handle datasets far more efficiently than other blockchains.  This allows the procedural logic that generates land parcels and governs the rules of the game to live on the blockchain.  In addition, information about the persistent world such as the location and orientation of objects is also stored on-chain.  This means that MNA has no central server that it relies on to stay online and available to users.  As long as MNA continues to pay CHR tokens to the network nodes, the game will remain live.

This set of properties allows for several groundbreaking possibilities for NFTs that are covered in depth in this article.  In the context of MNA, a simple example would be that a rare NFT item could have 5 uses.  You could use it once, and then sell it to another player with 4 uses still left in the item.  This item would be worth more on the open market than another instance of the same item with only 1 use.

BSC has seen rapid adoption as of late, due to the speed and affordability of transaction costs compared to Ethereum.  The ERC-721 NFT standard is commonly used on Ethereum, and this was ported to Binance Smart Chain as the BEP-721 standard.  The 721 standard is suitable for simple operations like buying, selling, and breeding - but the limited amount of metadata prevents it from being used for more complex operations.

By deploying a hybrid architecture, MNA can access the liquidity and user base of both Ethereum and Binance Smart Chain for its NFT market outside the game, while harnessing the advanced features of Chromia Originals in game.

Since MNA’s backend runs on Chromia, the events of the game directly alter the NFT data stored on its blockchain, which are in turn linked to the ‘paired’ NFT token that exists on Ethereum or BSC.

MNA is one of the first examples of Chromia being used extensively as a backend Layer 2 for a decentralized application.  The salient point here is that Chromia isn’t just being tacked on for scalability, it offers a feature set that no other blockchain can provide.  The Chromia Originals NFT standard, relational blockchain architecture and flexible fee model are all essential to shaping MNA into an end product which can achieve mass appeal and bring power to the people.