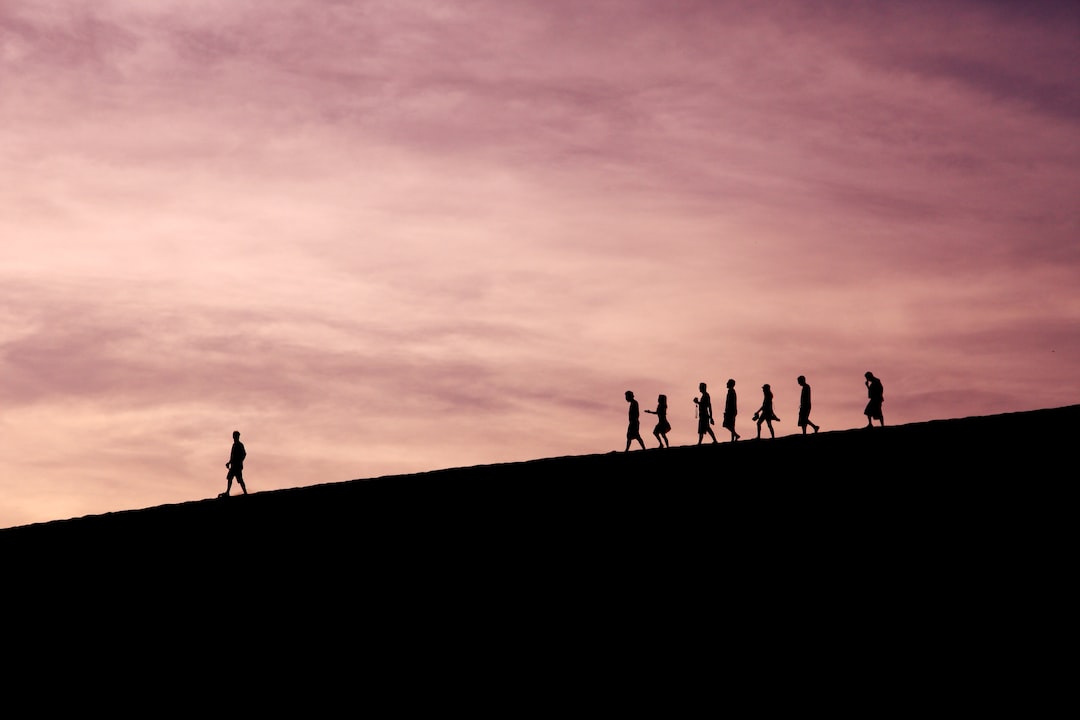 By Adam Pfeifer and James Wombles

In the midst of the launch of our relational blockchain, Chromia, we decided that it would be beneficial to us and the blockchain community if we could translate our whitepaper into several different languages. The translations are still a work in progress, but in the meantime, we decided to condense and summarize the research we have conducted into an informative publication on the world’s leading blockchain initiatives.

These areas have been selected because of their current and potential blockchain usage, adaptation, and results. The selection criteria includes the number of summits and conferences hosted, their total population and government support. We are excited to see how these regions can utilize blockchain technology to influence the world.

Besides being home to some of the world’s largest tech companies, namely Samsung, the country has been estimated to account for up to 30% of crypto trading worldwide. Additionally, the largest messaging app in South Korea, Kakao, is looking to implement a crypto wallet into their app. With over 50 million current users nationwide, this will undoubtedly propel the population’s interest in cryptocurrencies, but how might it influence development on the blockchain?

South Korea’s government has been an outspoken supporter of blockchain solutions since late 2018. This past December, the nation unveiled a plan to invest 4 billion Korean won, the equivalent to roughly $3.5 million USD, into creating a blockchain-based ‘virtual power plant’ in the city of Busan. On June 5th, with the help of two smaller providers and backing from the state, the country’s largest power provider has announced the collaborative pursuit of a blockchain-based system for transacting Renewable Energy Certificates (RECs). The deal was signed between the Korean Electric Power Corporation and Nambu Electric Power in cooperation with a previous agreement to establish similar systems with Korean Southern Power Co. The project is aimed at increasing transparency and accountability among the distribution of RECs, and is projected to influence significant job growth within the country’s blockchain sector.

Popularity of the tech has begun trickling from the top down. In addition to the investment into the energy sector, the nation’s government plans on spending an additional $108 million USD by 2023 in an effort to aid blockchain businesses in development projects. The expenditure will provide start ups and moguls alike with a large complex to work amongst each other, in hopes of an increased sharing of ideas and thus, greater innovation. We expect that the capabilities of the blockchain will become increasingly apparent to developers over the next several years and are looking forward to the innovations that will come out of South Korea in the future.

Japan is the second largest economy for Bitcoin on any given day and, as showcased by the country hosting the Yokohama 2019 Blockchain Conference this coming November, has shown a lot of interest in blockchain solutions.

“Japan has always been very forward thinking and looking for ways to innovate across all aspects of technology... the country has a lot of investors looking for new opportunities to invest in a country that has a very low federal interest rate, even reaching negative interest rates at times. These two factors have sparked interest in cryptocurrencies and crypto-assets as a way for Japan to shape the future of crypto.”

Japan pioneered an interesting use of blockchain by establishing themselves as the first nation to implement the technology into their voting system, resulting in the residents of Tsukuba being able to have a say in local development projects. Japan seems excited for blockchain to take over the technology sector and other important aspects of life that require updated security. Luckily, there is no shortage of brilliant minds in the country that can bring such developments to fruition.

Japan is the home of some popular dapps (decentralized applications) currently in use. A game called My Crypto Heroes uses blockchain to ensure ownership of items and facilitate the trading of them. The game is relatively new but already has several thousand players and has surpassed a total trading volume of $2.9 million USD. This game poses some insight into the world that is dapps: a decentralized world with no dispute as to who owns what, who has traded what, and the price of items.

Lets compare the possibilities within dapps to the current state of gaming transactions. In a centralized application, for example the popular soccer game FIFA, users own a card of a real life player. However, if the game were to break, there is no evidence that the user owned this player; the player loses his worth and the user loses the value of the time and often real currency spent obtaining this player. Japanese developer, double jump.tokyo inc. has created a proof of ownership within My Crypto Heroes that in turn, creates a sustainable in game economy framework. Virtual characters and land plots can be traded with other players for real currency in the form of Ethereum, specifically ERC-721. Though the game is rather simple today, one can only imagine the gaming revolution that would ensue if a game as popular as FIFA, which boasts over 30 million unique users, could adapt the same technology. As Japan aims to establish these fundamental principles in their current blockchain gaming projects, they are opening doors for developers worldwide to build upon their success.

India clocks in as the second largest country in terms of population and has displayed an exciting increase in blockchain interest over the past several years. Hosting the India Dapp Festival June 14-15 was a big step towards increasing both education and usage of the tech. This, when combined with the vast amount of possible use cases in the country (specifically the poor infrastructure and unregulated energy consumption), makes India one of the most exciting prospects for innovation.

India currently holds over 55% of the global market share in IT services. As an influential global figure in technology services, India has the potential to offer itself to blockchain development more than all of the other countries in the world combined. Possibilities range from agriculture to healthcare, financial services, and more. While other countries may already be using blockchain in these industries, India is the largest democracy in the world and has the potential to take the technology above and beyond its competition.

The country has unfortunately suffered from several instances of corruption within their government, where officials have been found guilty of manipulating their land registry database systems. This is done via the illegal or illegitimate development or selling of land by powerful government officials and offices. Irrefutable evidence of who owns what and purchases/sales would do away with most foreseeable corruption. We have already proposed a solution for implementing blockchain land registry solutions in India (see our Adhara Pradesh Land Registry Pilot), but there is a long way to go.

With companies like Somish, Cyber Infrastructure, and Deqode finding blockchain solutions via decentralized apps in a vast handful of industries, the country has established itself as a more than suitable home for developers. India’s use of innovative solutions across multiple fields is interesting enough, but even more so when we look at the country’s rise in entrepreneurship. India is home to 33 entrants of the 2019 Global Entrepreneurship Summit, a business showcase with an investor audience that seeks to solve issues in five global challenges: water, agriculture, healthcare, connectivity, and energy. Decentralized solutions have already been proposed in all five of these topics but with the right investments, action will ideally be taken in the near future.

The Arabic language spans across 26 countries, meaning that blockchain integration in the area not only has the power to go beyond how multiple, let alone one, countries operate internally, but how over two dozen communicate and operate with each other. With some of the most concentrated wealth in the world, the MENA region has already shown an enthusiasm for blockchain. A great example of this is the UAE, who has had its own cryptocurrency since 2016. The nation wants to turn its crown jewel, Dubai, into a ‘smart city’ that uses blockchain for all of its visa applications, license renewals, and bill payments by 2021. Dubai has already proven their status as a leader in blockchain by utilizing the tech to store and access all of the city’s health records. When the city’s government reaches its final goal of being fully powered by Blockchain, it will relieve an estimated 100 million processes of documentation.

Even more exciting is the fact that the UAE is just one of 26 actors in this region. Jeddah, Saudi Arabia’s second largest city, has introduced a blockchain based system of ATM/bank transactions to eliminate fraud in the finance industry. Kuwait recently launched their NBK Direct Remit Program which utilizes RippleNet’s blockchain technology to allow instant cross border payments throughout the middle east. This use of blockchain has greatly increased the identity security feature in these transactions and thus, creates the potential for more sustainable business than has ever been possible in the region, but it doesn’t stop there.

Blockchain in the MENA region has bigger uses than just changing business. The majority of conflicts in the Middle East start over allocation and usage of natural resources. The desert climate of the area does not allow for a bountiful agriculture industry, and water access itself is a problem in the region. There have been efforts to turn the irrigation system of agriculture in the Middle East into a blockchain based operation, one that hopefully would lead to more resources for all and fewer conflicts among countries.

Having outlined some of the world’s fastest growing blockchain markets, it is now up to the developers to join the cause and redefine the global market. We offer a tool to do that. Chromia is a relational database with a new, safe programming language and innovative sidechain architecture that allows secure, unlimited-scalability for dapps like never before.

We are giving power to the people and power to you.

For updates, check out our social media: